I think the jetlag is winning at this point of time, I left Indiana, went to Texas, then to Thailand, then to Malaysia, and I am now in Ivory Coast. This all happened within 1.5 months and my mother ask, “Why aren’t you Blogging?” 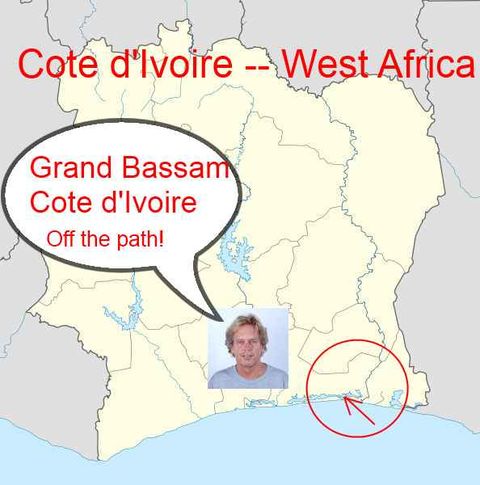 Yes, I am aware my writing style is offbeat, choppy, sort of like Jack Kerouc on drugs, but what is probably makes me the one in the many writers is my the consistent quantity, not quality of writing. My Mother knows in the back of her mind, I do not have writer’s block, I always am writing something, or making a noise in some way or the another. If I am not Blogging, then she does have a reason to be worried.

There was no reason to be worried; jetlag and the rush of a new culture had me in mental suspension, off my game, plus I have been spending time with all my friends from Grand Bassam.

I have been worried, there was police state style war here when I left, and it was possible some would leave, or some would die. As best I can tell, there we a very few that left, and none died. Generally in the police state wars, it is just more grudge match killing, politicians setttle old score, and optimize their chances of collecting the taxes of the country. (By killing the competition of the job.)

By the way, I try to not use clichés like “It is a breathtaking sunset.”

I have realized a person needs to use them, unless they can create their own, readers expect them; to not use them is to make them uncomfortable.

Oh well, I am in Cote d’Ivoire, the Ivory Coast, and I have never seen an Elephant in this country, I think they ate them all years ago. But if there is one guarantee about Cote d’Ivoire, is this not a cliché country, what you think is going to happen, will not happen.

I love Cote d’Ivoire, or the Nizema ethnic group that lives at Quartier France the Grand Bassam.

Today is December 6, and as I understand, Bah my Ivory Coast girlfriend will return from Ghana to Grand Bassam, I hope. One never knows what a normal person will do in the normal developed countries on the plant, time is not important, so I can only hope she arrives, it is not guaranteed.

I suppose in the 20 percent of the world that is over-developed, they do the same; they arrive late with an excuse. The difference here, when or if she arrives late, there will be no excuses; it will be when she arrives, no more and no less.

The first language here in Quartier France is Nizema

By the way; WIMAX Internet SUCKS