Decimius Magnus Ausonius was born in Bordeaux in ca. 310. His father was a noted physician of Greek ancestry and his mother was descended on both sides from long-established aristocratic Gallo-Roman families of southwestern Gaul. Ausonius was given a strict upbringing by his aunt and grandmother, both named Aemilia. He received an excellent education, especially in grammar and rhetoric, but professed that his progress in Greek was unsatisfactory. Having completed his studies, he trained for some time as an advocate, but he preferred teaching. In 334, he established a school of rhetoric in Bordeaux, which was very popular. His most famous pupil was St. Paulinus of Nola, who later became Bishop of Nola.After thirty years of this work, he was summoned by Valentinian to the imperial court to teach Gratian, the heir-apparent. The prince greatly respected his tutor, and after his accession bestowed on him the highest titles and honours that any Roman (besides from the royal family) could attain, culminating in the consulate in 379. Ausonius also took part in a military campaign against the Alamanni, in 375, and then later he received the Suebian slave girl Bissula as his part of the booty; he later addressed a poem to her.After the murder of Gratian in 383, Ausonius retired to his estates near Burdigala (now Bordeaux) in Gaul. These supposedly included the land now owned by Château Ausone, which takes its name from him. He appears to have been a late and perhaps not very enthusiastic convert to Christianity. He died about 395. 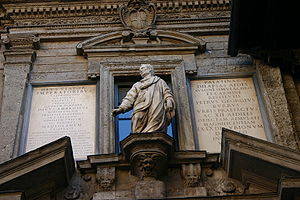