Unimog designates a range of multi-purpose auto four wheel drive medium trucks produced by Mercedes-Benz, a division of Daimler AG. The name Unimog is pronounced in German and is an acronym for the German "UNIversal-MOtor-Gerät", Gerät being the German word for machine or device. Daimler Benz took over manufacture of the Unimog in 1951 and they are currently built in the Mercedes truck plant in Wörth am Rhein in Germany. Another assembly of the Unimog at the plant of the Mercedes-Benz Türk A.Ş. in Aksaray, Turkey. In Argentina, had built until the first years of the 80's, in the González Catán factory.

New Unimogs can be purchased in one of three series. 1)The medium series 405, also known as the UGN ("Geräteträger" or equipment carrier), is available as the U300 through U500 models. 2)The heavy series 437, also known as the UHN ("Hochgeländegängig" or highly mobile cross country), is available as the U3000-U5000 model. 3)The U20, the smallest Unimog, is based on a shortened U300 frame and has a cab over engine compartment from the Brazilian Accelo light truck (Caminhões Leves) series.

The first model was designed shortly after World War II to be used in agriculture as a self-propelled machine providing a power take-off to operate saws in forests or harvesting machines on fields. It was designed with permanent 4WD with equal size wheels in order to be driven on roads at higher speeds than standard farm tractors. With their very high ground clearance and a flexible frame that is essentially a part of the suspension, Unimogs are not designed to carry as much load as regular trucks.

Due to their off-road capabilities, Unimogs can be found in jungles, mountains and deserts as military vehicles, fire fighters, expedition campers, and even in competitions like truck trials and Dakar Rally rally raids. In Western Europe, they are commonly used as snowploughs, municipal equipment carriers, agricultural implements, construction equipment and road-rail vehicles. 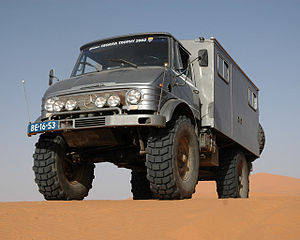