A traction engine is a self-propelled steam engine used to move heavy loads on roads to provide power at a chosen location.

A traction engine is a self-propelled steam engine used to move heavy loads on roads, plough ground or to provide power at a chosen location. The name derives from the Latin tractus, meaning 'drawn', since the prime function of any traction engine is to draw a load behind it. They are sometimes called road locomotives to distinguish them from (railway) steam locomotives – that is, steam engines that run on rails.Traction engines tend to be large, robust and powerful, but heavy, slow, and have poor manoeuvrability. Nevertheless, they revolutionized agriculture and road haulage at a time when the only alternative prime mover was the draught horse.They became popular in industrialised countries from around 1850, when the first self-propelled portable steam engines for agricultural use were developed. Production continued well into the early part of the 20th century, when competition from internal combustion engine–powered tractors saw them fall out of favour, although some continued in commercial use in the UK into the 1950s and later. All types of traction engines have now been superseded, in commercial use. However, several thousand examples have been preserved worldwide, many in working order. Steam fairs are held throughout the year in the UK, and in other countries, where visitors can experience working traction engines at close hand.Traction engines were cumbersome and ill-suited to crossing soft or heavy ground, so their agricultural use was usually either "in the belt" – powering farm machinery by means of a continuous leather belt driven by the flywheel – or in pairs, dragging an implement on a cable from one side of a field to another. However, where soil conditions permitted, direct hauling of implements ("off the drawbar") was preferred – in the U.S., this led to the divergent development of the steam tractor. 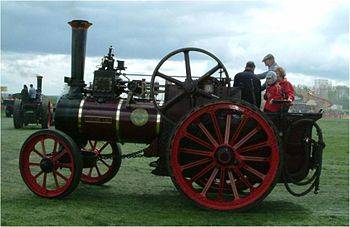