A torpedo boat is a relatively small and fast naval vessel designed to carry torpedoes into battle.

A torpedo boat is a relatively small and fast naval vessel designed to carry torpedoes into battle. The first designs rammed enemy ships with explosive spar torpedoes, and later designs launched self-propelled Whitehead torpedoes. They were created to counter battleships and other large, slow and heavily armed ships by speed and agility. A number of inexpensive boats attacking en masse could overwhelm a larger ship's ability to fight them off using its large, slow-firing guns. This way an inexpensive fleet of torpedo boats could defend against much larger and more expensive fleets, albeit only in the coastal areas to which their small size and limited fuel load restricted them.The introduction of fast torpedo boats in the late 19th century was a serious concern to navies of the era. In response, navies operating large ships introduced smaller ships to counter the threat. These were essentially similar to the torpedo boats they faced, but mounted a light gun instead of torpedoes. As these designs became more formalized they became known as "torpedo boat destroyers", and eventually evolved into the modern destroyer.Torpedo boats also evolved over time, notably with the addition of guided missiles. Today the class is generally known as "fast attack craft". 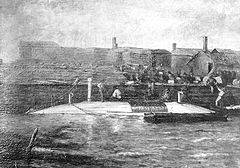