A tank is a tracked, designed for front-line combat which combines operational mobility, tactical offensive, and defensive capabilities.

A tank is a tracked, armoured fighting vehicle designed for front-line combat which combines operational mobility, tactical offensive, and defensive capabilities. Firepower is normally provided by a large-calibre main gun in a rotating turret and secondary machine guns, while heavy armour and all-terrain mobility provide protection for the tank and its crew, allowing it to perform all primary tasks of the armoured troops on the battlefield. Tanks were developed and first used in combat by the British during World War I as a means to break the deadlock of trench warfare. They were first deployed at the Battle of Somme in limited numbers. During construction, to conceal their true identity as weapons, they were designated as water carriers for the Mesopotamian campaign and referred to as "tanks" (as in "water tank"). However, there are two other proposed etymologies – these are discussed in the Etymology section below. Interwar developments in both design and tactics evolved during World War II, producing important concepts of armoured warfare which persist to this day and were prominently displayed during World War II. The Soviet Union introduced the T-34, one of the best tanks in service throughout the war. Germany introduced blitzkrieg, a strategy which makes use of massed concentrations of tanks supported by artillery and air power to break through the enemy front and cause a complete collapse in enemy resistance. Tanks in the Cold War advanced to counter greater battlefield threats. Tanks became larger and their armour became thicker and much more effective. Advances in manufacturing late in the war allowed the mass production of composite armor. Aspects of gun technology changed significantly as well, with advances in shell design. Today, main battle tanks are considered a key component of modern armies. Modern tanks seldom operate alone, as they are organized into armoured units which involve the support of infantry, who may accompany the tanks in infantry fighting vehicles. They are also usually supported by reconnaissance or ground-attack aircraft. 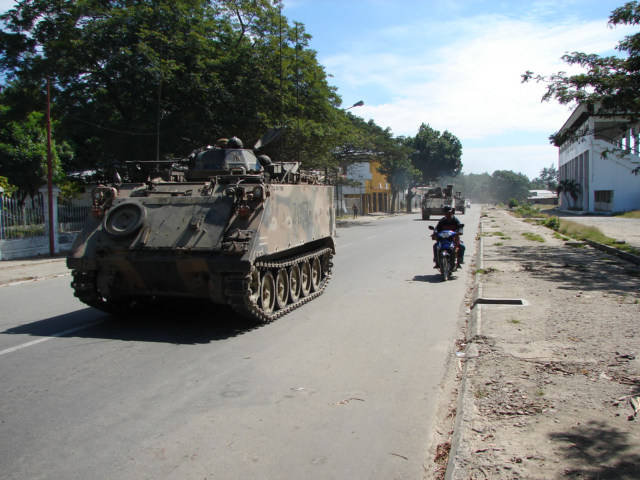