A submarine is a watercraft capable of independent operation below the surface of the water.

A submarine is a watercraft capable of independent operation below the surface of the water. It differs from a submersible, which has more limited underwater capability. The term submarine most commonly refers to large crewed autonomous vessels; however, historically or colloquially, submarine can also refer to medium sized or smaller vessels (midget submarines, wet subs), remotely operated vehicles or robots.The word submarine was originally an adjective meaning "under the sea"; consequently other uses such as "submarine engineering" or "submarine cable" may not actually refer at all to the vessel. Submarine was in fact shortened from the proper term, "submarine boat", and is often further shortened to "sub" when the word is employed informally. Submarines should always be referred to as "boats" rather than as "ships", regardless of their size. The English term U-boat for a German submarine comes from the German word for submarine, U-Boot, itself an abbreviation for Unterseeboot ("undersea boat").Although experimental submarines had been built before, submarine design took off during the 19th century, and they were adopted by several different navies. Submarines were first widely used during World War I (1914–1918) and now feature in many large navies. Military usage includes attacking enemy surface ships or submarines, aircraft carrier protection, blockade running, ballistic missile submarines as part of a nuclear strike force, reconnaissance, conventional land attack (for example using a cruise missile), and covert insertion of special forces. Civilian uses for submarines include marine science, salvage, exploration and facility inspection/maintenance. Submarines can also be modified to perform more specialized functions such as search-and-rescue missions or undersea cable repair. Submarines are employed, too, in tourism and for undersea archaeology.Most large submarines comprise a cylindrical body with hemispherical (and/or conical) ends and a vertical structure, usually located amidships, which houses communications and sensing devices as well as periscopes. In modern submarines this structure is the "sail" in American usage, and "fin" in European usage. A "conning tower" was a feature of earlier designs: a separate pressure hull above the main body of the boat that allowed the use of shorter periscopes. There is a propeller (or pump jet) at the rear and various hydrodynamic control fins as well as ballast tanks. Smaller, deep diving and specialty submarines may deviate significantly from this traditional layout.Submarines have one of the largest ranges of capabilities in any vessel, ranging from small autonomous examples to one- or two-person vessels operating for a few hours, to vessels which can remain submerged for 6 months such as the Russian Typhoon class - the biggest submarine in use and built. Submarines can work at greater depths than are survivable or practical for human divers. Modern deep diving submarines are derived from the bathyscaphe, which in turn was an evolution of the diving bell. 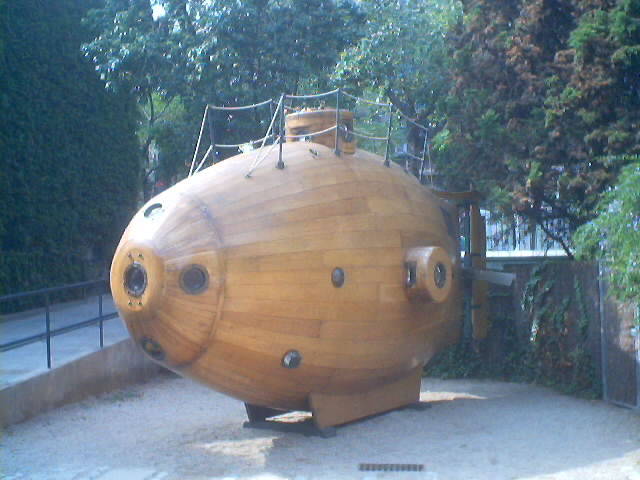 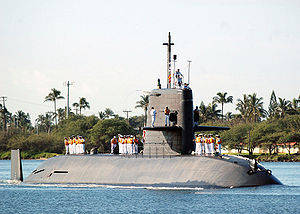