A space station is a manned satellite designed to remain in space (or most commonly low Earth orbit) for a long period of time.

A space station (also called an orbital station) is a manned satellite designed to remain in space (or most commonly low Earth orbit) for a long period of time, and which has the ability for other spacecraft to dock to it. A space station is distinguished from other manned spacecraft by its lack of major propulsion or landing facilities?instead, other vehicles are used to transport people and supplies to and from the station. The only space station currently in orbit is the International Space Station. Previous stations include the Almaz and Salyut series, Skylab and most recently Mir.Space stations are used to study the effects of long-term space flight on the human body as well as to provide platforms for greater number and length of scientific studies than available on other space vehicles. All space stations have been designed with the intention of rotating multiple crews, with each crew member staying aboard the station for weeks or months, but rarely more than a year. Since the ill-fated flight of Soyuz 11 to Salyut 1, all manned spaceflight duration records have been set aboard space stations. The duration record for a single spaceflight is 437.7 days, set by Valeriy Polyakov aboard Mir from 1994 to 1995. As of 2009, three astronauts have completed single missions of over a year, all aboard Mir.Space stations have been used for both military and civilian purposes. The last military-use space station was Salyut 5, which was used by the Almaz program of the Soviet Union in 1976 and 1977. 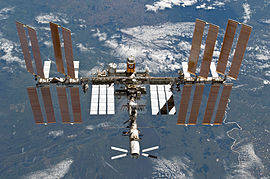