A snowmobile, also known in some places as a snowmachine, or sled, is a land vehicle for winter travel on snow.

A snowmobile, also known in some places as a snowmachine, or sled, is a land vehicle for winter travel on snow. Designed to be operated on snow and ice, they require no road or trail. Design variations enable some machines to operate in deep snow or forests; most are used on open terrain, including frozen lakes, or driven on paths or trails. Usually built to accommodate a driver and perhaps one adult passenger, their use is much like motorcycles and all-terrain vehicles (ATVs) intended for winter use on snow-covered ground and frozen ponds and waterways. They have no enclosure other than a windshield and their engine normally drives a continuous track or tracks at the rear; skis at the front provide directional control.Early snowmobiles used rubber tracks, but modern snowmobiles typically have tracks made of a Kevlar composite. Originally snowmobiles were typically powered by two-stroke gasoline/petrol internal combustion engines. Four-stroke engines are becoming more and more common in snowmobiles, primarily to address environmental complaints.Originally intended as a winter utility vehicle to be used where other vehicles cannot go, they appealed to hunters and workers transporting personnel and material across snow-covered land, frozen lakes and rivers. In the latter part of the 20th century, they have been put to use for recreational purposes as well. People who ride them commonly are known as snowmobilers. The contemporary types of recreational riding forms are known as snowcross/racing, trail riding, freestyle, mountain climbing, boondocking, carving, ditchbanging and grass drags. Summertime activities for snowmobile enthusiasts include drag racing on grass, asphalt strips, or even across water. 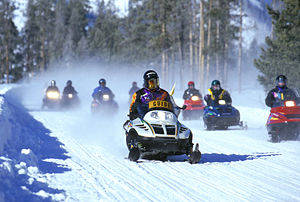