A skyway is a type of pedway consisting of an enclosed or covered bridge between two buildings.

In an urban setting, a skyway, catwalk, sky bridge, or skywalk is a type of pedway consisting of an enclosed or covered bridge between two buildings. This protects pedestrians from the weather. These skyways are usually owned by businesses, and are therefore not public spaces (compare with sidewalk). Skyways usually connect on the first few floors above the ground-level floor, though they are sometimes much higher, as in Petronas Towers, SWFC and Kingdom Centre (though this skyway is often referred to as a sky bridge). The space in the buildings connected by skyways is often devoted to retail business, so areas around the skyway may operate as a shopping mall. Non-commercial areas with closely associated buildings, such as university campuses, can often have skyways and/or tunnels connecting buildings.The world's largest skyway network – Calgary, Alberta's "+15 Walkway" system – has a total length of 16 km (10 miles). However, the system is discontinuous, and it does not connect every downtown building. The largest continuous network of skyways – the Minneapolis Skyway System – spans 8 miles (13 km) connecting 69 blocks in downtown Minneapolis.Other cities in the Midwest, such as Des Moines, Cedar Rapids, Rochester, and Saint Paul also have significant skyway systems. On a smaller scale, terminals of large airports are often connected by skywalk systems, as at Manchester Airport, United Kingdom.The Mumbai Skywalks system is a discontinuous system of 50 skywalks planned in the Mumbai Metropolitan Region, each 1 to 2 km in length. When completed, the system will be the largest skyway system in the world. The first of these is a 1.3km (0.8mi) long skywalk connecting the suburban regions of Bandra and Kurla.Some cities have the equivalent of a skyway underground, and many locales have mixed subway/skyway systems; see underground city. 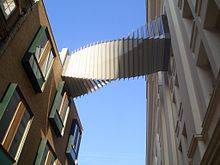