PT Boats were a variety of motor torpedo boat (hull classification symbol "PT", for "Patrol Torpedo"), a small, fast vessel used by the United States Navy in World War II to attack larger surface ships. The PT boat squadrons were nicknamed "the mosquito fleet". The Japanese called them "Devil Boats." The original pre-World War I torpedo boats were designed with "displacement" hulls. They displaced up to 300 tons and the top speed was 25 to 27 kn (29 to 31 mph; 46 to 50 km/h). The PT boats used in World War II were built using the planing-type hull form developed for racing boats. They were much smaller (30-75 tons) and faster (35-40 knots). Both types were designed to strike at larger warships with torpedoes, using relatively high speed to get close, and small size to avoid being spotted and hit by gunfire. They were much less expensive than large warships. Also, PT boats were much faster, smaller, and cheaper than the conventional (displacement hull) types. During World War II, American PT boats engaged enemy destroyers and numerous other surface craft, ranging from small boats to large supply ships. PT boats also operated as gunboats against enemy small craft, such as armored barges used by the Japanese forces for inter-island transport. 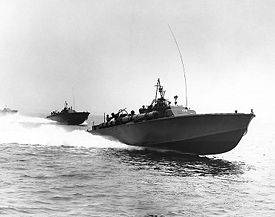