Pneumatic tubes are systems in which cylindrical containers are propelled through a network of tubes by compressed air or by partial vacuum.

Pneumatic tubes (or capsule pipelines or Lamson tubes; also known as Pneumatic Tube Transport or PTT) are systems in which cylindrical containers are propelled through a network of tubes by compressed air or by partial vacuum. They are used for transporting solid objects, as opposed to conventional pipelines, which transport fluids. Pneumatic tube networks gained great prominence in the late 19th and early 20th century for businesses or administrations that needed to transport small but urgent packages (such as mail or money) over relatively short distances (within a building, or, at most, within a city). Some of these systems grew to great complexity, but they were eventually superseded by more modern methods of communication and courier transport, and are now much rarer than before. However, in some settings, such as hospitals, they remain of great use, and have been extended and developed further technologically in recent decades.A small number of pneumatic transportation systems were also built for larger cargo, to compete with more standard train and subway systems. However, these never gained as much popularity as practical systems. 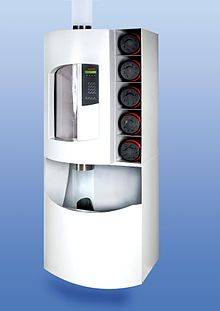