Personal rapid transit (PRT), also called personal automated transport (PAT) or podcar, is a public transportation mode featuring small automated vehicles operating on a network of specially-built guide ways. PRT is a type of automated guideway transit (AGT), a class of system which also includes larger vehicles all the way to small subway systems.In PRT designs, vehicles are sized for individual or small group travel, typically carrying no more than 3 to 6 passengers per vehicle. Guide ways are arranged in a network topology, with all stations located on sidings, and with frequent merge/diverge points. This approach allows for nonstop, point-to-point travel, bypassing all intermediate stations. The point-to-point service has been compared to a taxi or a horizontal lift (elevator).PRT was a major area of study in the 1960s and 1970s. In 1975, Morgantown PRT, an experimental automated system which exhibits some (but not all) features of PRT, was opened to the public after significant construction cost overruns. Morgantown PRT remains in use today, and there have been discussions on expanding it.A PRT system (by 2getthere) went into operation in Masdar City in the UAE in November 2010. The system has 10 passenger and 3 freight vehicles serving 2 passenger and 3 freight stations connected by 1.2 kilometers of one-way track. The system is in operation 18 hours a day, seven days a week serving the Masdar Institute of Science and Technology. Trips take about 2 and a half minutes (i.e., an average speed of roughly 12mph / 20km/h) and are presently free of charge. Average wait times are expected to be about 30 seconds.In addition, several test tracks are operational and undergoing active testing. A pilot system at London Heathrow Airport, United Kingdom, was constructed using the ULTra design. Originally scheduled to be operational in 2009, it recently underwent 4 weeks of public trials where it achieved a 99.6% availability Heathrow Results. Note that 97.5% is considered transit level of service A.Several cities have recently expressed interest in PRT, and two small city-based systems are currently in development, in Suncheon, South Korea and Amristar, India. 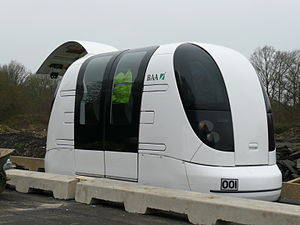