A parachute is a device used to slow the motion of an object through an atmosphere by creating drag.

A parachute is a device used to slow the motion of an object through an atmosphere by creating drag, or in the case of ram-air parachutes, aerodynamic lift. Parachutes are usually made out of light, strong cloth, originally silk, now most commonly nylon. Parachutes must slow an object's terminal vertical speed by a minimum 75% in order to be classified as such. Depending on the situation, parachutes are used with a variety of loads, including people, food, equipment, space capsules, and bombs.Drogue chutes are used to aid horizontal deceleration of a vehicle (a fixed-wing aircraft, or a drag racer), or to provide stability (tandem free-fall, or space shuttle after a touchdown).The word "parachute" comes from the French para, meaning "to prepare for" or "to protect against," originally from the Latin parare, and chute, the French word for "fall," and it was originally coined, as a hybrid word which meant literally "that which protects against a fall," by the French aeronaut François Blanchard (1753–1809) in 1785. Some modern parachutes are classified as semi-rigid wings, which are maneuverable and can make a controlled descent to break on impact with the ground. 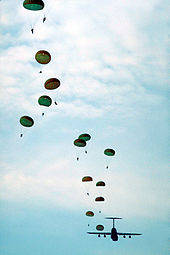