The London Underground is a metro system in the United Kingdom

The London Underground is a metro system in the United Kingdom that serves Greater London and adjacent districts of Essex, Hertfordshire and Buckinghamshire. Its first section opened in 1863, making it the oldest underground metro system in the world. The system operates below ground in central London but generally runs on the surface in the outlying suburbs. Approximately 55 per cent of its routes are above ground. The system comprises 11 lines, serving 270 Underground stations. Integrated with, but formally separate from the London Underground, is the Docklands Light Railway. It serves 40 stations in north-east and south-east London. Both systems are operated by Transport for London (TfL). Most of the combined network is north of the River Thames with stations in the City of London or one of twenty-seven London boroughs. Stations at the north-eastern end of the Central line are in the Epping Forest district of Essex and at the north-western end of the Metropolitan line are in the Three Rivers and Watford districts of Hertfordshire and the Chiltern district of Buckinghamshire. 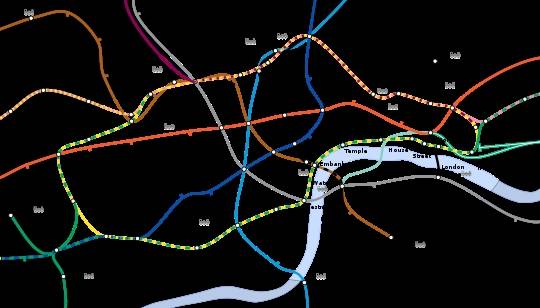