A lifeboat (liferaft) is a small, rigid or inflatable watercraft carried for emergency evacuation in the event of a disaster aboard ship.

A lifeboat (liferaft) is a small, rigid or inflatable watercraft carried for emergency evacuation in the event of a disaster aboard ship. In the military, a lifeboat may be referred to as a whaleboat, dinghy, or gig. The ship's tenders of cruise ships often double as lifeboats. Lifeboat drills are required by law on larger commercial ships.

Inflatable lifeboats may be equipped with auto-inflation (carbon dioxide or nitrogen) canisters or mechanical pumps. A quick release and pressure release mechanism is fitted on ships so that the canister or pump automatically inflates the lifeboat, and the lifeboat breaks free of the sinking vessel. Commercial aircraft are also required to carry auto-inflating life rafts in case of an emergency water landing, and are also kept on offshore platforms.

Ship-launched lifeboats are lowered from davits on a ship's deck, and cannot be sunk in normal circumstances. The cover serves as protection from sun, wind and rain, can be used to collect rainwater, and is normally made of a reflective or fluorescent material that is highly-visible. Lifeboats have oars, flares and mirrors for signaling, first aid supplies, and days' of food and water. Some lifeboats are more capably equipped to permit self-rescue; with supplies such as a radio, an engine and sail, heater, navigational equipment, solar water stills, rainwater catchments and fishing equipment.

The International Convention for the Safety of Life at Sea (SOLAS) and the International Life-Saving Appliance Code (LSA) requires certain emergency equipment be carried on each lifeboat and liferaft used on international voyages. Modern lifeboats carry an Emergency Position-Indicating Radio Beacon (EPIRB) and either a radar reflector or Search and Rescue Transponder (SART). In the United States, the US Coast Guard ensures the proper type and number of lifeboats are in good repair on large ships. 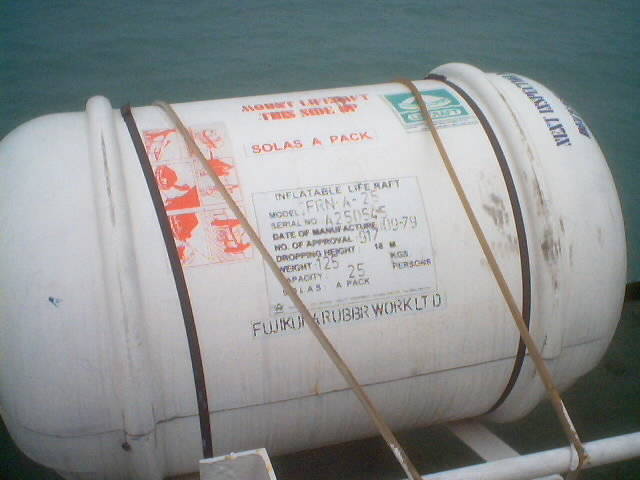