A jetboat is a boat propelled by a jet of water ejected from the back of the craft. Unlike a powerboat or motorboat that uses a propeller in the water below or behind the boat, a jetboat draws the water from under the boat into a pump inside the boat, then expels it through a nozzle at the stern.Jetboats were originally designed by Sir William Hamilton (who developed a waterjet in 1954) for operation in the fast-flowing and shallow rivers of New Zealand, specifically to overcome the problem of propellers striking rocks in such waters.

Previous attempts at waterjet propulsion had very short lifetimes, generally due to the inefficient design of the units and the fact that they offered few advantages over conventional propellers. Unlike these previous waterjet developments, such as Campini's and the Hanley Hydrojet, Hamilton had a specific need for a propulsion system to operate in very shallow water, and the waterjet proved to be the ideal solution. From this the popularity of the jet unit and jetboat increased rapidly, and through further developments it was found the waterjet offered several other advantages over propellers for a wide range of vessel types, and as such waterjets are used widely today for many high speed vessels including passenger ferries, rescue craft, patrol boats and offshore supply vessels.

Jet boats are highly maneuverable, and many can, from full speed, be reversed and brought to a stop within little more than their own length, in a maneuver known as a "crash stop". The well known Hamilton turn or "jet spin" is a high speed manoevre where the boat's engine throttle is cut, the steering is turned sharply and the throttle opened again causing the boat to spin quickly around with a large spray of water.

There is no engineering limit to the size of jet boats, though the validity of their use depends a lot on the type of application. Classic prop-drives are generally more efficient and economical at low speeds (up to about 20 knots) but as boat speed increases beyond this the extra hull resistance generated by struts, rudders, shafts, etc., means waterjets are more efficient in the 20-50 knot range. Also, in situations with very large propellers turning at slow speeds (such as tug boats), the equivalent size waterjet would be too big to be practical. For these reasons the vast majority of waterjet units are installed in high-speed vessels and in particular situations where shallow draught, maneuverability, and load flexibility are main concerns.

The biggest jet-driven vessels are found in military use or the high speed passenger/car ferry industry. South Africa's Valour class frigates (approximately 120m long) are the biggest jet-propelled vessels so far. Even these German-built vessels are capable of performing "crash stops". 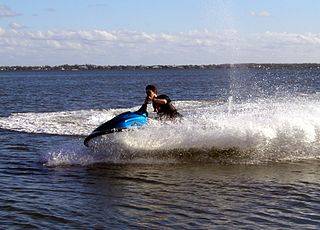