A hydrofoil is any liquid-based structure that provides lift because of its attack or camber.

A hydrofoil is any liquid-based structure that provides lift because of its attack or camber. This can be artificial, such as on a boat, or occur naturally, as with fish, aquatic mammals or other creatures like the sand dollar.

The term is most commonly used for the wing-like structure mounted on struts below the hull of a boat, which lifts the boat partially out of the water during forward motion, in order to reduce drag. As a synecdoche, the term "hydrofoil" is often used to refer to any boat that utilizes hydrofoil technology.Hydrofoils are similar in appearance and purpose to airfoils. As the watercraft increases in speed, the hydrofoils develop enough lift to raise the hull up and out of the water. This results in a great reduction in drag, and a further corresponding increase in speed. 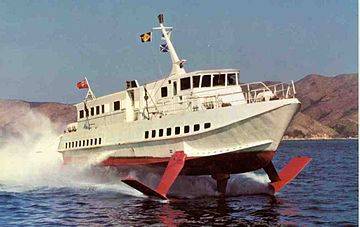