A human-powered aircraft (HPA) is an aircraft powered by direct human energy and the force of gravity; the thrust provided by the human may be the only source; however, a hang glider that is partially powered by pilot power is a human-powered aircraft where the flight path can be enhanced more than if the hang glider had not been assisted by human power. Likewise, HPA inevitably experience assist from thermals or rising air currents. Pure HPA do not use hybrid flows of energy (solar energy, wound rubber band, fuel cell, etc.) for thrust. In nil wind, a flatland-long-gliding aircraft is a form of HPA where the thrust in the nil wind is provided by the running of the pilot; when the pilot loses touch with the ground, his or her thrust ceases to add energy to the flight system and a glide begins; the pilot may or may not add energy after the pilot stops touching the ground. Humans who tow up a manned kite form one type of human-powered aircraft.Early attempts at human-powered flight were unsuccessful because of the difficulty of achieving the high power-to-weight ratio. Prototypes often used ornithopter principles which were not only too heavy to meet this requirement but aerodynamically unsatisfactory.

As of 2008, human-powered aircraft have been successfully flown over considerable distances. However, they are primarily constructed as an engineering challenge rather than for any kind of recreational or utilitarian purpose. 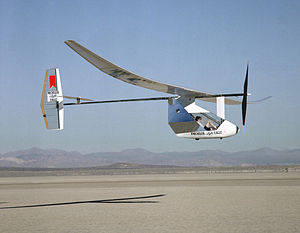