Hovercraft is a craft capable of traveling over surfaces while supported by a cushion of high-pressure air ejected against the surface below w/in a skirt.

A hovercraft (air-cushion vehicle, ACV) is a craft capable of traveling over surfaces while supported by a cushion of slow moving, high-pressure air which is ejected against the surface below and contained within a "skirt." Although supported by air, a hovercraft is not considered an aircraft.Hovercraft are used throughout the world as specialized transports. They can also be used after a natural disaster for emergency purposes. Because they are supported by a cushion of air, hovercraft are unique among all other forms of ground transportation in their ability to travel equally well over land, ice, and water. Small hovercraft are used for sport or passenger service, while giant hovercraft have civilian and military applications, and are used to transport cars, tanks, and large equipment in hostile environments and terrain. 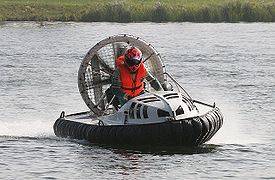