A chairlift is a type of passenger aerial lift, consists of numerous chairs attached to a constantly moving wire rope that is strung between two terminals

A detachable chairlift or high-speed chairlift is a type of passenger aerial lift, which, like a fixed-grip chairlift, consists of numerous chairs attached to a constantly moving wire rope (called a haul rope) that is strung between two (or more) terminals over intermediate towers. They are now commonplace at all but the smallest of ski resorts. Some are installed at tourist attractions as well as for urban transportation.

The significance of detachable chairlift technology is primarily the speed and capacity. Detachable chairlifts move far faster than their fixed-grip brethren, averaging 1200 feet per minute (13.6 mph, 6 m/s) versus a typical fix-grip speed of 500 ft/min (5.5 mph, 2.5 m/s). Because the cable moves faster than most passengers could safely disembark and load, each chair is connected to the cable by a powerful spring-loaded cable grip which detaches at terminals, allowing the chair to slow considerably for convenient loading and unloading at a typical speed of 200 ft/min (2.2 mph, 1 m/s), a speed slower even than fixed-grip bunny chairlifts.

Another advantage of detaching chairs is the ability to remove chairs during severe weather in order to reduce stress on the rope and towers. Furthermore, operating the unladen rope during extreme weather is effective at preventing—or greatly reducing—ice and snow accumulation on the sheaves and rope. This saves considerable time, expense and hazard when opening the chair for operation, which would otherwise require workers to climb each tower and chip away ice and shovel snow.

Chairlifts are made in a variety of sizes, carrying from 2 to 8 passengers. All chairs on a given chairlift usually have the same capacity. Slang terms for the different sizes include "doubles", "triples", "quads", and "six packs". Detachable chairlifts may also be described as "high speed" or "express", which results in terms such as "high speed quad" and "express quad".

Some detachable chairlifts have so-called bubble chairs, which add a retractable acrylic glass dome to protect passengers from weather.

An alternative system for reconciling slow boarding speeds with fast rope speeds is the carpet lift: the chairs move at full speed even through the terminal. Boarding passengers are progressively accelerated on a system of conveyor belts of carpet-like material until nearly matching the chair speed.

On Sunday, 26 December 2004, Lech am Arlberg and Schröcken in the Bregenzerwald, became the first chairlifts to have heated seats when five Doppelmayr detachable chairlifts offer skiers the added luxury of a warm seat on the uphill trip. 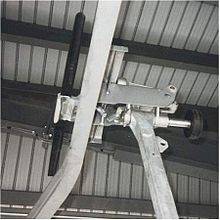