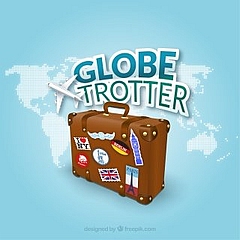 A cable car is any of a variety of transportation systems relying on cables to pull vehicles along or lower them at a steady rate.

A cable car is any of a variety of transportation systems relying on cables to pull vehicles along or lower them at a steady rate, or a vehicle on these systems.

Aerial lift where the vehicle is suspended in the air from a cable:An aerial tramway consists of a cabin suspended from a cable, pulled by another cable.A gondola lift consists of a loop of cable that is strung between two or more stations, usually over intermediate supporting towers, from which cars are suspended.A ropeway conveyor or material ropeway is a subtype of gondola lift, from which containers for goods rather than passenger cars are suspended.Chairlifts where open chairs are hauled above the ground by means of a cable.

Varieties in which the vehicle rests on rails or a road:A system to haul trains along streets, see Cable car (railway)The particular cable car system in operation in San Francisco, California, see San Francisco cable car systemA funicular consists of a pair of railway cars that alternately ascend and descend an inclined right-of-way, attached to a common cable.A cable railway uses a cable or rope to haul trains. 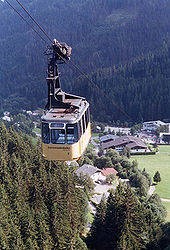