An autogyro is a type of rotorcraft which uses an unpowered rotor in autorotation to develop lift to provide thrust.

An autogyro is characterized by a free-spinning rotor that turns because of passage of air upward through the rotor. The vertical component of the total aerodynamic reaction of the rotor gives lift for the vehicle, and sustains the autogyro in the air. A separate propeller provides forward thrust, and can be placed in a tractor configuration with the engine and propeller at the front of the fuselage (e.g., Cierva), or pusher configuration with the engine and propeller at the rear of the fuselage (e.g., Bensen).

Whereas a helicopter works by forcing the rotor blades through the air, pushing air downwards, the autogyro rotor blade generates lift in the same way as a glider's wing by changing the angle of the air as it moves upwards and backwards relative to the rotor blade. The free-spinning blades turn by autorotation; the rotor blades are angled so that they not only give lift, but the angle of the blades causes the lift to accelerate the blades' rotation rate, until the rotor turns at a stable speed with the drag and thrust forces in balance.

The rotor head, pre-rotator shaft and Subaru engine configuration on a VPM M-16 autogyroPitch control of the autogyro is by tilting the rotor fore and aft; roll control is by tilting the rotor laterally (side to side). Three designs to affect the tilt of the rotor are a tilting hub (Cierva), swashplate (Air & Space 18A), or servo-flaps (Kaman SAVER). A rudder provides yaw control. On pusher configuration autogyros, the rudder is typically placed in the propeller slipstream to maximize yaw control at low airspeed (but not always, as seen in the McCulloch J-2, with twin rudders placed outboard of the propeller arc). 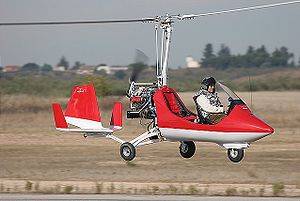