Sweat Rash is caused by too much sweat or perspiration, formally called Miliaria. There are solutions.

1. Very hot water to open pores and then cold, to open and close.
2. Hot tub with Chlorine
3. "Prickly Heat" powder
4. Extreme drying of skin, make sure you dry skin well after shower
5. Change clothing often during the day.
6. Remove clothing inside the room.
7. Direct fan onto your body to dry skin.
8. Air Conditioning
9. Alcohol cleaning
10. Scrub body well to make sure to clean skin.
12. Change underwear two or three times during the day.
13. Light clothing
14. Use bar soap that is anti-bacterial, this is easy to find in the Tropics.
15. Take shower using anti-fungus shamppo with nizoral.
16. Wach shirst between use, do not wear twice.

Signs and symptoms
Symptoms of miliaria include small red rashes, called papules, which may itch or more often cause an intense 'pins-and-needles' prickling sensation.[citation needed] These may simultaneously occur at a number of areas on a sufferer's body, the most common including the face, neck, under the breasts and under the scrotum. Other areas include skin folds, areas of the body that may rub against clothing, such as the back, chest, and stomach, etc. A related and sometimes simultaneous condition is folliculitis, where hair follicles become plugged with foreign matter, resulting in inflammation.

The symptoms relating to miliaria should not be confused with shingles as they can be very similar. Shingles will restrict itself to one side of the body but also has a rash-like appearance. It is also accompanied by a prickling sensation and pain throughout the region. Those who suspect they have shingles and not miliaria should seek medical advice immediately as the sooner antivirals are taken, the better. 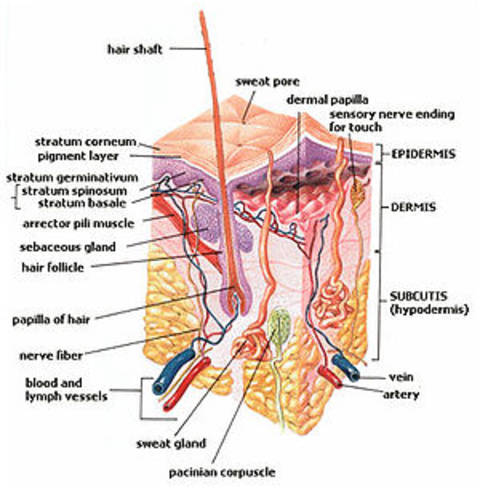