Sinus problem is very common for travelers and tourist, just landing by plane causes the sinus cavity to have pressure, then never ending dust.

Travel means you move from one environment to another, the sinus can react and cause a traveler many problems.

Sinus headaches happen to many travelers after deboarding a plane, the simple solution is to take sinus medicine, which opens the sinuses.

Sinusitis Defined: Sinusitis is inflammation of the paranasal sinuses, which may be due to infection, allergy or autoimmune issues. Most cases are due to a viral infection and resolve over the course of 10 days. It is a common condition with more than 24 million cases occurring in the United States annually.

Chronic sinusitis, by definition, lasts longer than three months and can be caused by many different diseases that share chronic inflammation of the sinuses as a common symptom. Symptoms of chronic sinusitis may include any combination of the following: nasal congestion, facial pain, headache, night-time coughing, an increase in previously minor or controlled asthma symptoms, general malaise, thick green or yellow discharge, feeling of facial 'fullness' or 'tightness' that may worsen when bending over, dizziness, aching teeth, and/or halitosis. Each of these symptoms has multiple other possible causes, which should be considered and investigated as well. Unless complications occur, fever is not a feature of chronic sinusitis. Often chronic sinusitis can lead to anosmia, a reduced sense of smell. In a small number of cases, acute or chronic maxillary sinusitis is associated with a dental infection. Vertigo, lightheadedness, and blurred vision are not typical in chronic sinusitis and other causes should be investigated.

Chronic sinusitis cases are subdivided into cases with polyps and cases without polyps. When polyps are present, the condition is called chronic hyperplastic sinusitis; however, the causes are poorly understood and may include allergy, environmental factors such as dust or pollution, bacterial infection, or fungus (either allergic, infective, or reactive). Non-allergic factors, such as vasomotor rhinitis, can also cause chronic sinus problems. Abnormally narrow sinus passages, such as having a deviated septum, can impede drainage from the sinus cavities and be a contributing factor. A combination of anaerobic and aerobic bacteria , are detected in conjunction with chronic sinusitis, Staphylococcus aureus (including methicilin resistant S.aureus ) and coagulase-negative Staphylococci. Typically antibiotic treatment provides only a temporary reduction in inflammation, although hyperresponsiveness of the immune system to bacteria has been proposed as a possible cause of sinusitis with polyps (chronic hyperplastic sinusitis).

Attempts have been made to provide a more consistent nomenclature for subtypes of chronic sinusitis. The presence of eosinophils in the mucous lining of the nose and paranasal sinuses has been demonstrated for many patients, and this has been termed Eosinophilic Mucin RhinoSinusitis (EMRS). Cases of EMRS may be related to an allergic response, but allergy is not often documented, resulting in further subcategorization into allergic and non-allergic 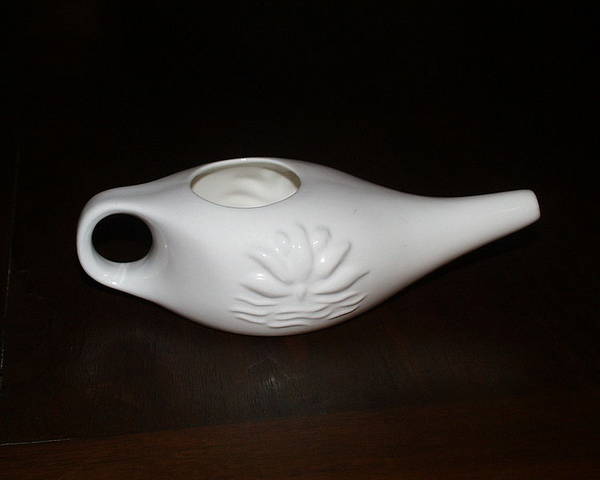