The Mystery of Big City Travel

The Mystery of Big City Travel

If you are thinking about moving abroad, the first question that needs answered it what size of the city is best for you? Personally, a city between 50,000 and 200,000 people is plenty. Anything bigger and chaos is a never ending experience, but chaos is addictive, and addicts protect their addiction.

My first memory of the big city was my parents packing the five children into a station wagon and going to Fort Wayne, Indiana. It was obvious my parents were nervous driving in a city this big. I grew up in Orland, Indiana, and any city is big when you come from a village of 400 people. And, going to a city of 300,000 people was a frightening, and enlightening experience, it was the first time I saw a black man, first time I went to McDonalds and shopped at K-Mart. When the Glenbrook Mall opened, it was a miracle of shopping. 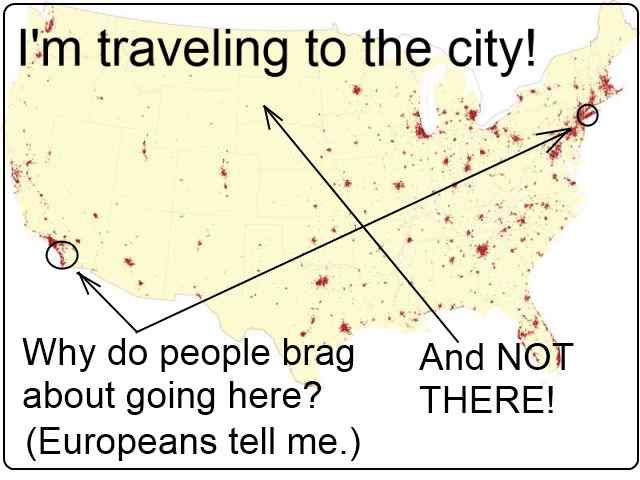 Visted Major USA Cities
I have been to New York, Boston, Miami, Chicago, Atlanta, Los Angeles, San Francisco, New Orleans, Albuquerque, Denver; I have been to 40 of the states in the USA, I have visited the majority of USA cities, and so what?

I am telling you not to brag, but to say, so what, it means so little to me… it not what I love about world travel, I do not like being another anonymous person in the city.

Visited Major Cities of the World
I am a world traveler, and I have been to more major cities than almost any person on the planet. After 90 countries, and 15 years of perpetual travel, it is very difficult to avoid major cities; they are always in the way. Planes, trains, and buses all go to a big city; the major cities are the transportation hubs of the planet. There is almost no way to avoid them, they squat on my path.

The Big City Mystery is Frustrating.
It is a mystery to me, and truly it makes me angry, if I am not on the road traveling to a big city, readers, friends, and even family are angry. For some odd reason, I must enjoy sitting in car traffic for 1-5 hours, as if a one hour drive to work is a good thing.

Traffic Jams are the love of the world.
1-2 hours to get out of the city, and one hour to travel to the next one, big cities suck my time, they are like gravity, and they force me to go monotonously slow. People say, I hate traffic jams, and then they go live in traffic, as I see it, they love traffic; the whole world loves traffic congestion.

YOU do what you LOVE.

Here are 2-5 percent of the cities I have visited:

Europe:
I now have been to London, Paris, Munich, and Barcelona.

South America
I now have been to Lima, Quito, Bogotá, and Santiago

Central America
I now have been to Guatemala, San Jose, and Panama.

It is annoying to me to list out cities I have visited, there are 1000’s, they are like mosquitoes. I am not able to think cities; I think about countries, my world is a little bigger than cities.

If you travel to New York City? Then what?
I have walked in Central Park, seen the Statue of Liberty, and been on Wall Street, and drank coffee at a Starbucks that sucked my money from my pocket at amazing speeds.

After that, then what? Why would a person stay?

I want to know why people are addicted to cities?

Soon YOU will Live in the City.
Soon, very soon you will be living in a big city; it is like gravity to humans. The average person is not capable of saying no to the cities of the planet. There is something about the human psyche, which demands to be part of the crowd, to be part of a big city.

By 2050, they say that 85 percent of you will live in the city, and the villages of the planet will surely almost die. As if everyone went to Wal-Mart, and forgot to go home. And yes, whether they you admit it are in denial, people do shop in Walmart more than for Yves Saint Laurent clothing.

Does a human every know why they live where they live, or is it just one big accident on the freeway of life?

I promote the life less normal…