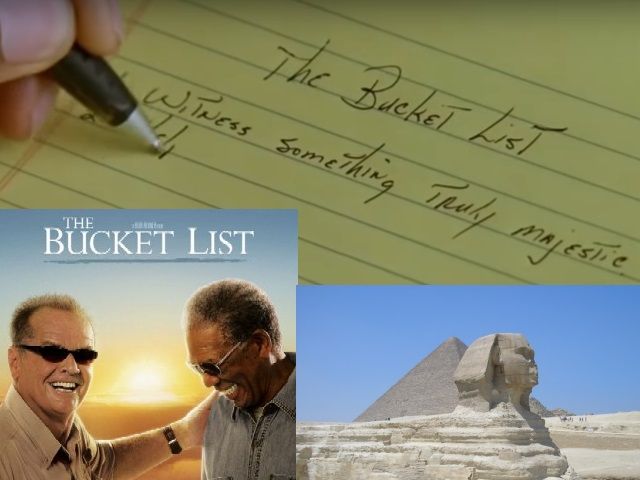 The Bucket List
The Bucket List is a 2007 American comedy-drama film directed and produced by Rob Reiner, written by Justin Zackham, and starring Jack Nicholson and Morgan Freeman. The main plot follows two terminally ill men on their road trip with a wish list of things to do before they "kick the bucket".

The film premiered on December 15, 2007 in Hollywood and opened in limited release in the United States on December 25, 2007, by Warner Bros. The film then had a wide release on January 11, 2008. Despite receiving mixed reviews from critics, the film was chosen by National Board of Review as one of the top ten films of 2007 and was a box office success, grossing $175 million worldwide.

Plot
Two men, blue-collar mechanic Carter Chambers (Freeman) and billionaire hospital magnate Edward Cole (Nicholson) meet for the first time in the hospital after both have been diagnosed with terminal lung cancer.

Carter is a gifted amateur historian and family man who wanted to become a history professor in his youth but never rose above his status as a mechanic. Edward is a four-time divorced health-care tycoon and cultured loner who enjoys tormenting his personal valet/servant, Thomas (Sean Hayes), who later reveals his name is actually Matthew. Edward enjoys drinking Kopi Luwak, one of the most expensive coffees in the world.

During their time in the ward, Carter and Edward find common ground. Carter begins writing a "bucket list", or things to do before he "kicks the bucket". After hearing he has less than a year, Carter discards the list. Edward finds it the next morning and urges Carter to do everything on the list, offering to finance the trip for both of them. Carter agrees and despite the protests of his wife, Virginia (Beverly Todd), Edward and Carter begin their around-the-world vacation. They go skydiving, drive a Shelby Mustang, fly over the North Pole, eat dinner at Chevre d'or in France, visit and praise the beauty and history of Taj Mahal, India, ride motorcycles on the Great Wall of China, attend a lion safari in Tanzania, and visit the base of Mt. Everest in Nepal.

Atop the Great Pyramid, looking out over the pyramids of Khafre and Menkaure, they confide about faith and family, revealing that Carter has long been feeling less in love with his wife and that Edward is deeply hurt by his estrangement from his only daughter, who disowned him after he drove away her abusive husband. In Hong Kong, Edward hires a prostitute for Carter, who has never been with any woman but his wife. Carter declines and realizing that he loves his wife, asks to return home.

On the drive back, Carter reciprocates by trying to reunite Edward with his daughter. Believing it is a breach of trust, Edward angrily storms off. Carter returns home to his family while Edward stays home alone. However, the family reunion is short-lived: Carter suffers a seizure and is rushed to the hospital, the cancer having spread to his brain.

Edward, who is now in remission, visits him and they share a few moments, wherein Carter reveals how Edward's Kopi Luwak coffee is grown in Sumatra and then fed to and defecated by a jungle cat before being harvested because of the special aroma of the gastric juices. Carter crosses off "laugh till I cry" from his bucket list and insists Edward finish the list without him. Carter then undergoes surgery but dies on the operating table.

As news of Carter's death is given to his wife and family, Edward attempts to reconcile with his own daughter. She accepts him back into her life and introduces him to the granddaughter he never knew he had. After greeting the little girl with a kiss on the cheek, Edward crosses "kiss the most beautiful girl in the world" off the list. Edward delivers a eulogy at Carter's funeral, during which he explains that the last three months of Carter's life were the best three months of his life and crosses "help a complete stranger for the good" off the list.

The epilogue reveals that Edward lived until age 81, and his ashes were then taken to the summit of a peak in the Himalayas by his assistant Matthew. As Matthew places a Chock full o'Nuts coffee can alongside another can, he crosses off the last item on the bucket list ("witness something truly majestic") and places it between the cans. Carter's narration reveals that the two cans contain their ashes and that Edward would have loved this, because he was "buried on the mountain and that was against the law".