The Innocents Abroad by Mark Twain

Explanations of the book "The Innocents Abroad by Mark Twain"

The Innocents Abroad, or The New Pilgrims' Progress is a travel book by American author Mark Twain published in 1869 which humorously chronicles what Twain called his "Great Pleasure Excursion" on board the chartered vessel Quaker City (formerly USS Quaker City) through Europe and the Holy Land with a group of American travelers in 1867. It was the best selling of Twain's works during his lifetime and one of the best selling travel books of all time.

A major theme of the book, insofar as a book assembled and revised from the newspaper columns Twain sent back to America as the journey progressed can have a theme, is that of the conflict between history and the modern world; the narrator continually encounters petty profiteering and trivializations of the past as he journeys, as well as the strange emphasis placed on particular events in the past, and is either outraged, puzzled, or bored by the encounter. One example can be found in the sequence during which the boat has stopped at Gibraltar. On shore, the narrator encounters seemingly dozens of people intent on regaling him, and everyone else in the known world, with a bland and pointless anecdote concerning how a particular hill nearby acquired its name, heedless of the fact that the anecdote is, indeed, bland, pointless, and toward the end, entirely too repetitive. Another example may be found in the discussion of the story of Abelard and Heloise, where the skeptical American deconstructs the story and comes to the conclusion that entirely too much fuss has been made about the two lovers. Only when the ship reaches areas of the world that do not exploit for profit or bore passers-by with inexplicable interest in their history, such as the passage dealing with the ship's time at the Canary Islands, is this trait not found in the text.

This reaction to those who profit from the past is found, in an equivocal and unsure balance with reverence, in the section of the book that deals with the ship's company's experiences in the Holy Land. The narrator reacts here, not only to the exploitation of the past and the unreasoning (to the American eye of the time) adherence to old ways, but to the profanation of religious history, and to the shattering of illusions, such as his dismay in finding that the nations described in the Old Testament could easily have fit inside many American states and territories, and that the kings of those nations might very well have ruled over fewer people than could be found in some small towns.

This equivocal reaction to the religious history the narrator encounters may be magnified by the prejudices of the time, as the United States was still primarily a Protestant nation at this point. The Catholic Church, in particular, receives a considerable amount of attention from the narrator, seemingly not because of any particular differences in doctrine that it may have with the narrator's own attitudes, but, rather because of its institutionalized nature. This is particularly apparent in the section of the book dealing with Italy, where the poverty of the lay population and the relative affluence of the church causes the narrator to urge, in the text of the book, if not directly, the inhabitants to rob their priests. 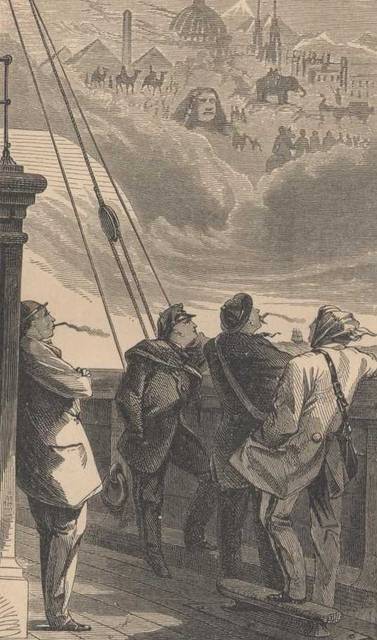 The Art of Shen Ku : a Book Translated as Pure Traveler or Phantom Passenger