You can avoid paying 25-30 USD luggage fees in the USA by NOT checking your bags, then forcing them to check them at the gate.

The USA airlines rewards corrupt behavior, there is no benefit in obeying the rules.

On October 22, 2012 as I was waiting to board an American Airlines flight from Austin, Texas to Los Angeles, California, I heard an announcement.
"Your carry-on luggage must fit in the bag sizer."

My thought was,
"Good for you American Airlines, make them idiots pay, earn money." 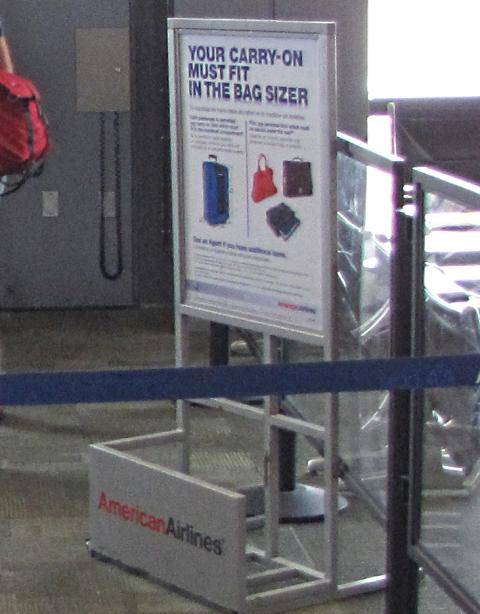 Any experienced, self-aware traveler "would" be aware that less than 20 percent of the carry-on bags will fit into one of these bag sizers. Only an idiot would think his or her carry-on luggage is the correct size. Yet, I am fully aware the world is full of some rather unaware folks, maybe 80 percent.

However, maybe because I am an Indiana farm boy, someone who considers it bad form, ungentlemanly like to scoff at rules, I check my bag, it feels proper to me. But, understand, I also think Great Britain is a wanker for having a Queen, that is not democracy.

I do my best to avoid dealing with other humans, and their insane creation of rules by people. What is the point in making rules, laws, or guides, if nobody is willing to enforce them.

People all over the planet ask me,
"How do I immigrate to the USA?"

I reply,
"Fly to Mexico, walk across the border, live for eight years, and they will grant you citizenship."

If you did not know it, American Airlines is having big money problems, while the ever tricky, and arrogant airlines Spirit is probably not. Therefore, I was sort of hoping American Airlines employees had wised up, and started to charge bag fees correctly. Nope, they still continue to drive their own company into the ground --- the pun was accidental.

So, all you need to do is Not Check your bag, then when you arrive at the gate, allow them to force you to check the bag, and you do not pay.

This is too stupid for words, but endemic of the world, the USA, the Internet, and people of planet earth.

When a society, when a business, when a government, when a people reward people who flaunt the rules, there is no civilization, it is barbarians.

Were we always barbarians? Maybe so, I was born in a small town called Orland, in the Midwest of the USA, it was an island, it was not normal.

The danger is this, if a person such as myself, gives up on society, and if I started to cheat, and game the bureaucracy, then be worried. I am positive it is possible to steal your identity in a world that celebrates the clever.

I point out these holes hoping that everyone breaks the rules, and one day the rules are enforced, because why have rules, if we do not enforce them?

It is insanity at work, people continue to believe that making more rules and laws it intelligent behavior. As I see it, the person wants to be the boss, has to be the stupid one in the room.

Yes, I dare you, make another rule you will not enforce!

Airlines Must Show Full Fares and Stop being Tricky Cheats on January 26, 2012