As a rule of thumb, paying over U.S. $2,000 for a round-trip plane ticket to any destination means you paid too much.

Yea, yea, yea, you will say that what what I've written below is SO EASY for me to write because I'm just another travel writer who does not understand real people's real situation. 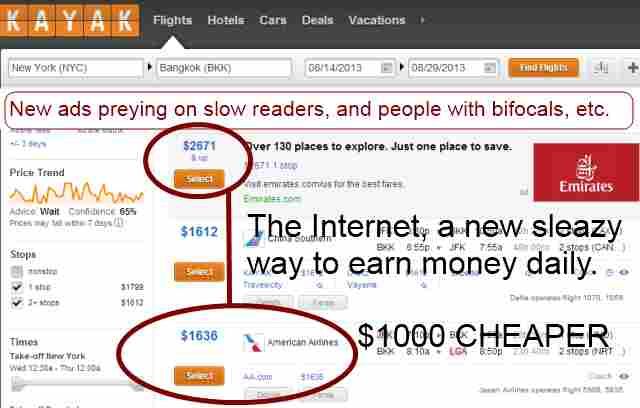 I am leaving July 10, 2013, for Africa, and because of the way I purchased the plane tickets, I am able to stop in the Dominican Republic for a month for free. I saved enough money to live free for one month on a Caribbean Island, which many Americans only dream of. But most Americans just check for air ticket prices from one vendor, and then they get sticker shock. They give up, their travel dreams squashed forever.

In speculative traveler talk, I could say, “I have purchased 15 around-the-world plane tickets.”

I live large, the life of luxury – contrary to any misinterpretation of readers, who key in on the word, hobo, and not on how or where I live. I cannot remember the last time I did not have air conditioning in my room or was without a 24/7 high-speed Internet connection.

I am going to live in the Dominican Republic free for a month, mainly because I do not want to travel more than eight hours in one flight. Generally, I refuse to take longer than about four-hour land trips.

(The USA is outstandingly annoying: I have to sit in a car for one hour just to go shopping. I usually only sit in cars for five minutes, so this hour-long sit is really weird. And then they want me to pay for gas to boot!)

About two months ago, another travel writer wrote me an email. She is extremely famous and takes people on tours of the world. She wanted to know how to travel to Haiti, a place where I lived for a couple of months before the earthquake.

I tried to ignore her emails, but she was persistent.

In the course of two months, I wrote more than 10 soothing, no-substance emails, generally saying, you need to be careful. But in the back of my mind, I wanted to write, “Send $100 to my Paypal account. I get paid for talking.”

I wanted a marker, not money; I wanted her to owe me. Plus, more importantly, I needed to be diplomatic, qualify her abilities, and truly help her.

She refused to call me six times, writing essentially, “I am too busy. Help me by email.”

Funny stuff: She indeed went to Haiti, and her friend had her phone stolen, and she thought she was being stalked.

What happened? While her friend was taking a photo, someone grabbed her cell phone and ran. She had the phone in an easy-to-grab location. This is how a person who never has traveled in his or her life gets robbed; it is the cliché travel theft.

My niece got robbed three times in Tanzania? Why? Because she thought she knew what she was doing. She went to volunteer. Yep, she volunteered in Tanzania … she volunteered to get robbed in one of the safest places on the planet to travel. But being a volunteer is like fresh meat in Africa; you may as well put a sign on your head, “NAÏVE.”

I get paid to talk, to write, to work and to help (except for my friends and family, of course). I earned roughly U.S. $2000 last year in travel-consulting fees.

I enjoy meeting new people. That is how I live my life. Yet generally, the advice I give over the phone cannot be written in a travel blog or even in email. I am no longer willing to get hate mail because I wrote the truth that some anonymous idiot did not want to hear.

Airlines Must Show Full Fares and Stop being Tricky Cheats on January 26, 2012

Bored in the BRU Airport