No Beach but a Turtle Philippines

I am in Puerto Princesa Palawan Island Philippines

I started by taking a taxi, this is the second attempt to find a beach in Puerto Princesa, my technique of taking a normal taxi and not the taxi that cater only to the tourist has lead me astray again. The English here is weak and I am having trouble with the word "Beach." It appears I am going to have to have the Hotel Receptionist person help me, maybe they will need to say swimming beach in the Tagalog Language of the Philippines. There are these taxis drivers that hang around like a connected leach to a cow at hotels. The speak good English and try to charge a person five time the normal fare for a taxi. Actually the locals all correct me there are no taxis in Puerto Princesa, there are only tarsus. There are these motorcycles with build on side cars that will carry you anywhere in the city, I think they are taxis and the locals must only use this word for a car. Nonetheless, these little motorcycles with a sidecar cost 6 Pesos, this is ridiculously cheap, however probably just about perfect for a local to afford to pay.

I did not find the beach on attempt number two, I think if there is a beach it is small, insignificant and ugly...

I did find this big turtle.

I was walking down the coast line, trying to find anything that looked like a beach, I found a lot of homes jutting out into the bay. Everyone is easy going and friendly, however not real talkative, the Philippines children are great and all have learned how to say,
"What is you name"
I say,
"Andy"
"What is you name?"

My reply answer only is answered by about one in five, so the English stops at the name questions, I am amazed they say,
"Hey Joe."

I do not know, maybe this is a hangover from the USA Military being here during the Second World War,

The boys pants were falling off and I was too far away to get a close up of he comical scene of him pouring water on this dead turtle. It was a sea turtle and the locals I believe were trying to say it got caught up in the fish farm operation off the shore about 100 Meters. I asked if they was going to eat it and they said no, they said,
"Bala."

I have no idea.

These home are called Shantytowns in the Guidebooks, I am trying to figure out how I feel about these home. In comparison to my home in the USA, I could say they are poor in comparison to me. However this is not fair, they are not poor,they are living very different than me and pretty normal. Poverty to me should include some social barometer that says, are they drastically different than the other people that living around them. These people are living the same as everyone else, no different no less, except for the rich here in the Philippines.

Poverty is an ugly word, like we should feel sorry for them. I do not feel sorry for them, I feel a little weak sometimes, however sorry or pity is not the word for this. I wish or think it would be nice for them to clean their clothes and wash their bodies a little easier. They are clean, however the time it takes to shower is 5 times more than me. I am in a nicer than normal hotel here and it does not have hot water, so maybe I should say three times.

Poverty is defined as earning less than one dollar per day by the United Nation, this is definition that is almost meaningless, what about the places where they barter. Maybe it does include this, however the definitions that reach me are meaningless. 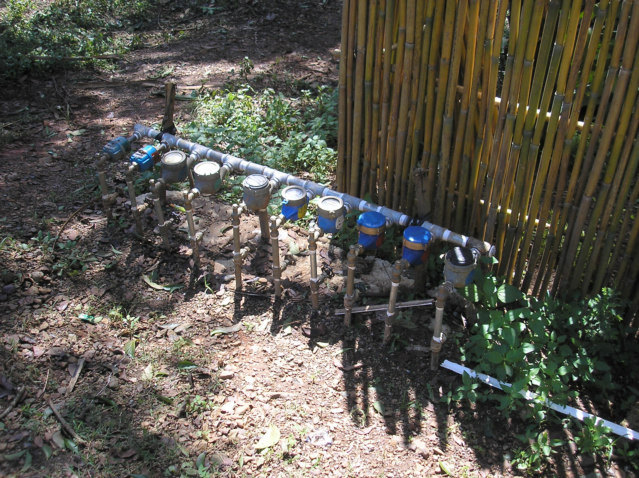 All these homes have water, the water is metered and I believe they must pay for the water, however this is also not totally true.

Poverty to me is somewhere when the line of quality of life goes down below..
1. No schools.
2. No clean water.
3. Disease or problems grow and they are not capable of adapting.
4. Controlled by larger groups by manipulation to stay obedient.
A. Mullahs, Clerics, Catholic Priest, Monks, etc or Bosses and owners.
Normally the owners work in partnerships with the governments. 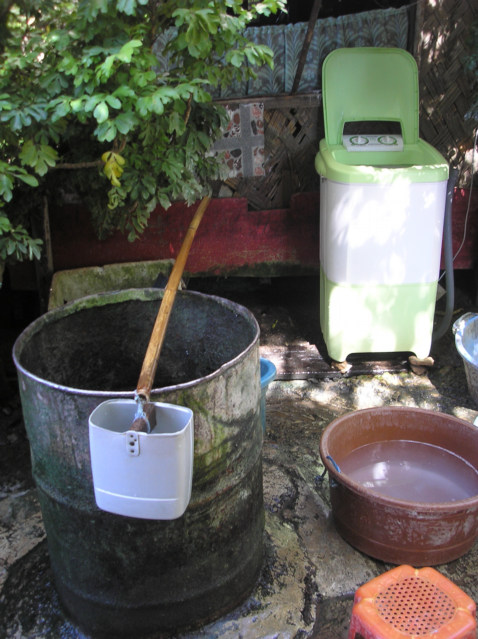 This is a well, we are presently about 40 meters from the water front, the water table is about one meter down. I do not think the water is clean, however the water is clean enough to wash clothes. In a land where you must pay for water, this water is cheaper. Potable or drinkable water is maybe available in all the bamboo design homes. 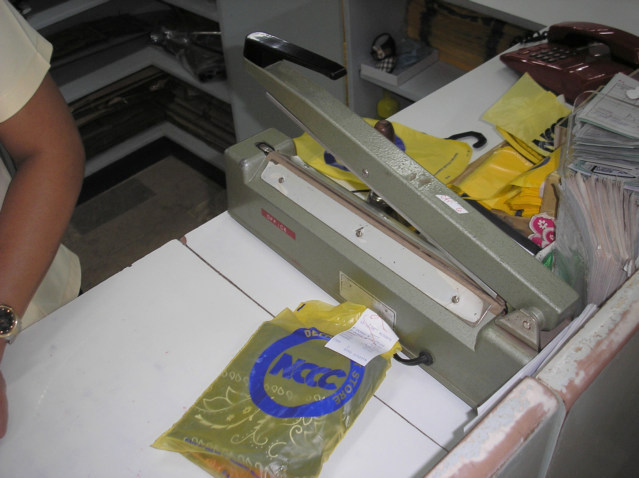 There is a very large store called NCCC here in Puerto Princesa, it has this double person security system. You buy something, pay for it, then the girl passes it down the line to the second person. She checks the slip, signs or marks it, then put the bag under this sealing machine. The bag is sealed an then the receipt is attached to the bag.

Keeping persons from stealing seems to be a big emphasis here in the Philippines. Many of the homes along the water, or almost all had these chain length fences, or bamboo fences around the homes. In my experiences there is not these types of systems unless there is a need. Sadly most of the honest and safe mentalities of the Southeast Asia has disappeared in this culture that is maybe three parts of cultures. One-third Native or Tagalog, one-third Span and one-third American. My travels seem to discover that anywhere there is a Catholic society there is more theft. Buddhist seem to have the least, however the levels of cruelness goes up, there are many tradeoffs. Arab have this friends and hospitality thing, however can be intolerant of anyone leaving the group or asking too many questions.