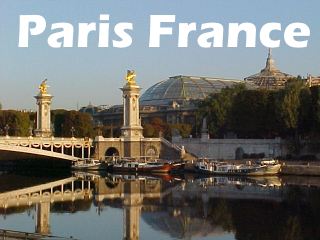 I went from Jerusalem Israel or Palestine to Cairo Egypt by bus, then upon arriving went to the Niger Embassy, then to the American Embassy trying to get a Visa to the country of Niger. Here are photos of day one in Cairo and all the adjoining heat and excitement. 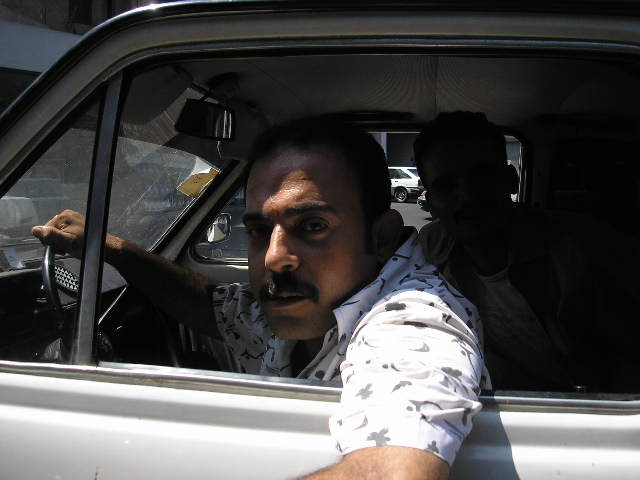 This is what always makes my day, when a person is just excited to say Hello, in a strange sort of English. 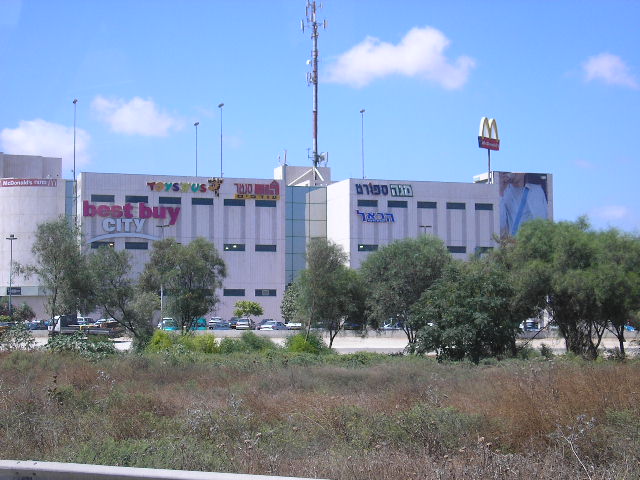 Palestine and Israel is supposed to be a refugee camp, this implies tents in the imagination of most people, however I was not stopped or did not have to go through any check from Tel Aviv to Jerusalem and from Jerusalem to Tel Aviv, however for sure I was in a Palestine area in Jerusalem, then on the way out of the city I see these three business name together.

I need to go look for the Refugee Camps when I return so I can prove or disprove the opinion of one Iranian, California Girl who said,
“It is easier for a Palestinian person to go to America than to go to Jerusalem.”

I have not seem poverty and no tents.

However, it looks like this Refugee camp can go to Best Buys and Toy’s R Us.

There is an average of wealth in any country, and sometimes there is a huge difference between the Rich Class and the Poor Class, however I am not getting the picture and for sure I need to investigate better because I have not found the poor in Israel, I am still looking… and will return to Israel to look for poor, however I am now in Cairo and much easier to find, however still a big and on and on city. 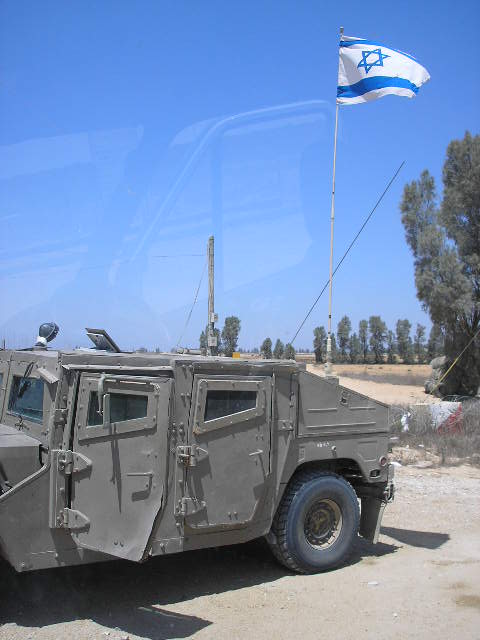 Israel Hummer at the border, not a very organized border and full of stops and questions, however they did not search me going out of the country.

Funny part is we had an armed escort with the tourist van all the way from the border of Egypt to Cairo, this is not a normal thing for me, I have never had an armed… automatic weapons and such, you know boys with guns, in a separate vehicle, something you would think you would have in Israel, however we did not, however we did have this in Egypt. 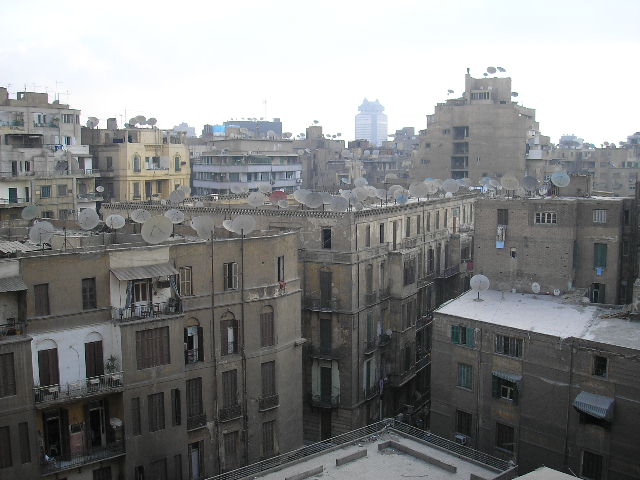 Cairo in the morning looking out my balcony window, from a Hotel that cost 40 Egyptian Pounds or maybe 8-10 Dollars U.S. per night, a dorm bed cost 16 Pounds. 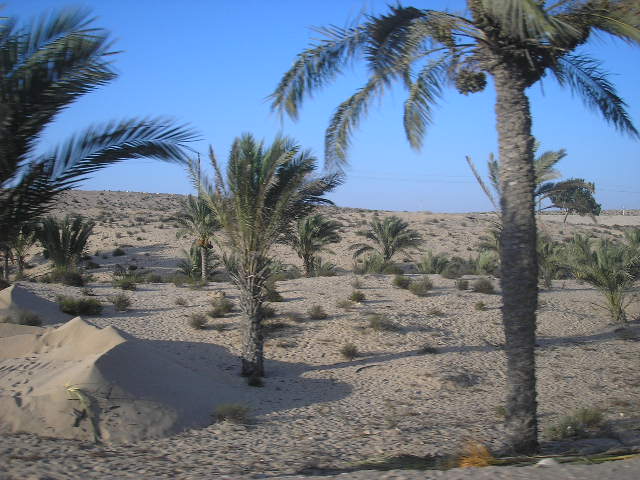 This is the desert along the way from Israel to Cairo Egypt. 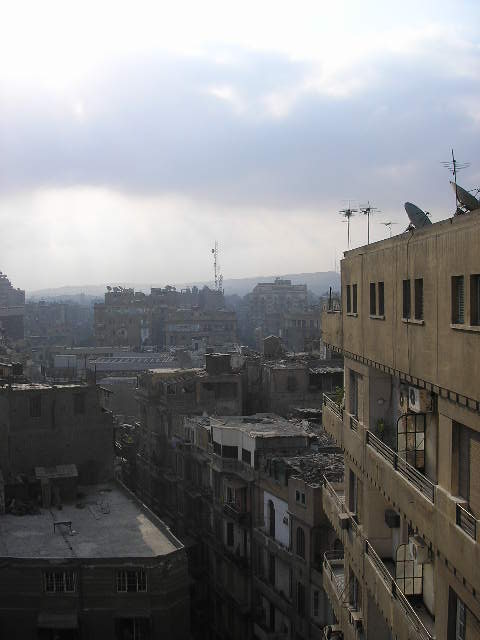 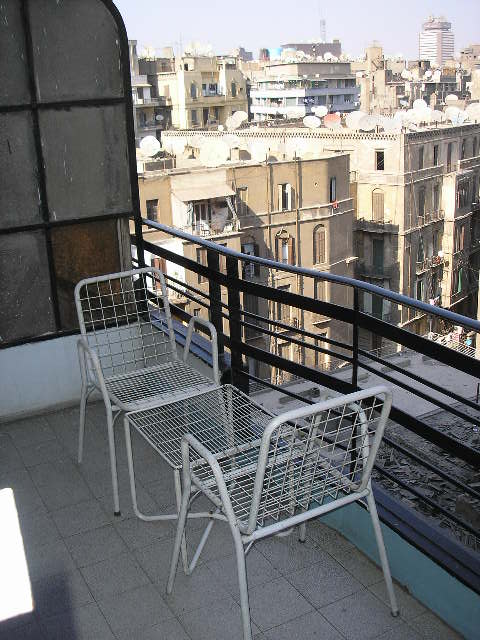 My balcony, the carpet is old, the room is old, the ceilings are 12-foot tall, full-length French doors leading to the balcony and this feel like the Brits used to be here to add flavors to the day. 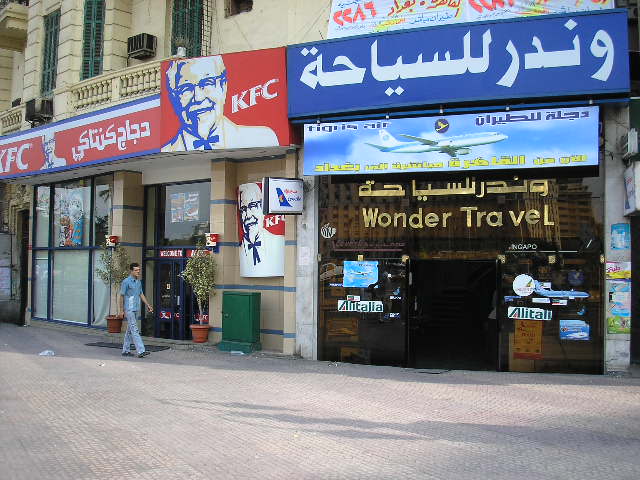 The KFC close to Hotel and the Wonder Tourist Agency, it is a wonder they sell a ticket, they have the personality of a rock. 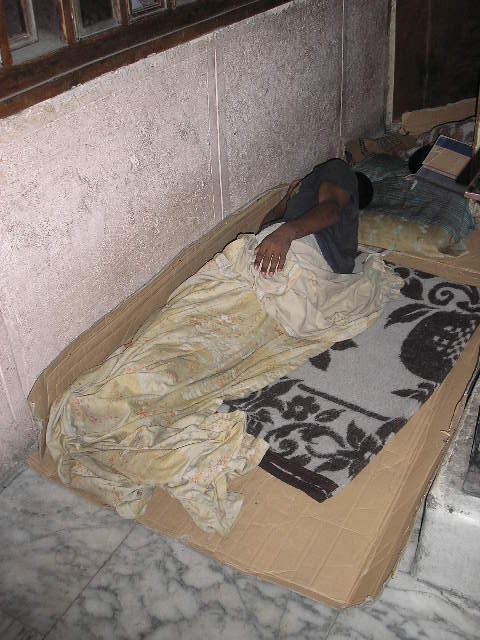 This is not a bum; this is probably a worker who also has a cell telephone as I caught him talking on it later, a while after I took this photo. In many countries, workers will pull up a spot and live or sleep close to work. 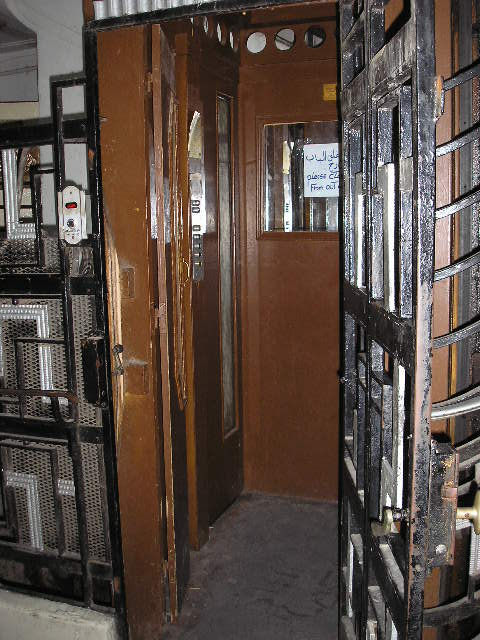 Very cool elevator like a trip into history of buildings, I have a really nasty photo of the emergency stairs, however opted to leave off, Cairo is half as dirty as India and more modern than South America, hard to describe clearly, a former British Colony they speak pretty good English and seem Friendly and more Honest than Israel, however hard to say.

The Arab world is a short-change you, talk too much, follow me, or give you orders world. I had to walk away from a guy today as he said,
“Follow me,” and I said,
“No,” and walked away.

In sales it is called the assumed close and in a culture that understands the tourist is afraid to annoy a culture they can get people to follow, except for me and I enjoy walking away, as I see this demanding of my time and good will as bad manners, and they are not looking out for my best good. 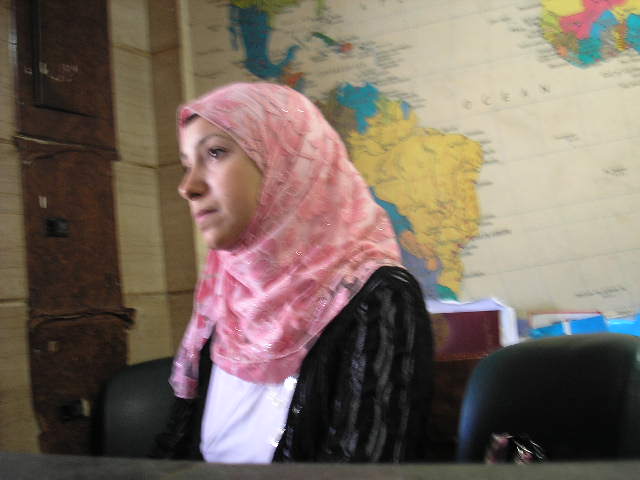 Rats, I did not capture the colorful beauty of this girl, however for sure I was trying to sneak a photo, she was nice.

I think her name was Shemilia or something like that, she made me promise I would come back and find out the price on a plane to Niger, I did return and as I suspected she had made zero progress.

Always better to sit and force a travel agent to search around the planet and they do nothing when you leave. 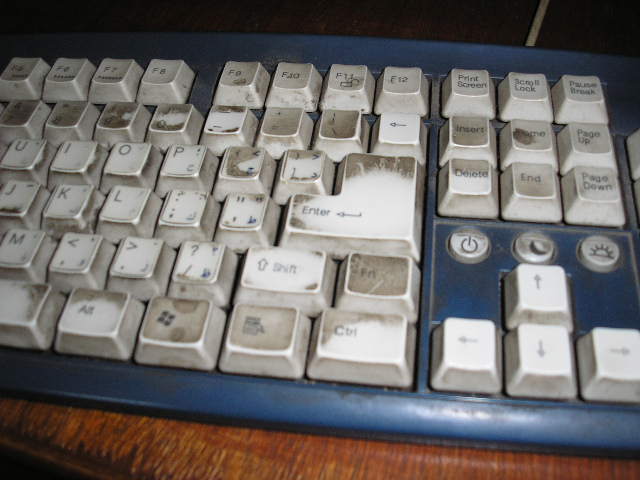 My computer locked up three times while trying to blog, so I took a photo of the keyboard. For those of you who think the USA or some countries are polluted, get a life, this is probably the result of the air in the room and for sure, their lungs are full of stuff, no wonder the world spits. 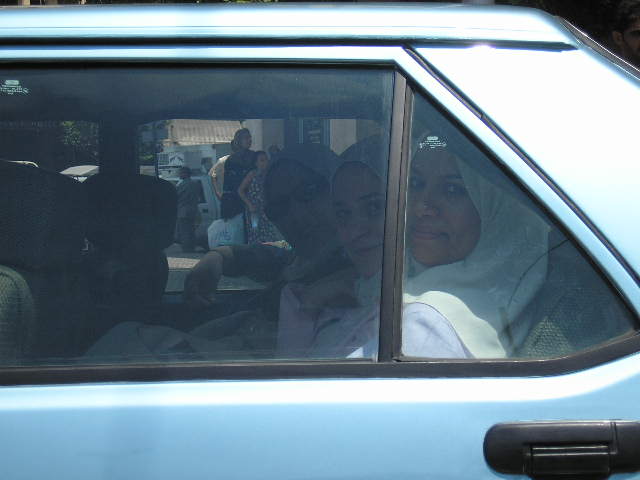 This is a photo of three girls in the back of a car sharing in a flirtatious looks and waves as I ride in Taxi. 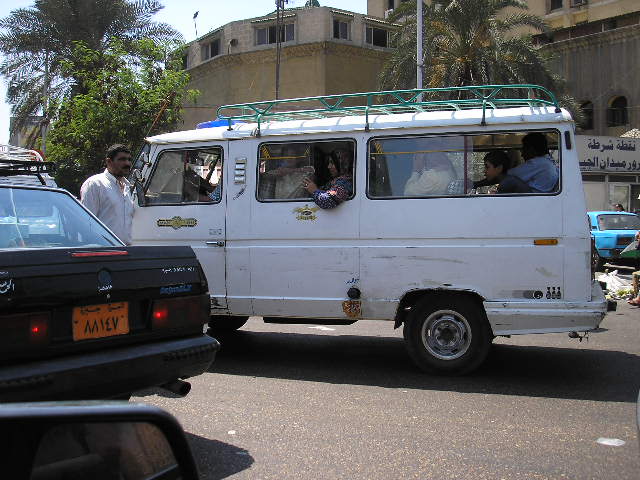 The small buses where the next photo was taken. 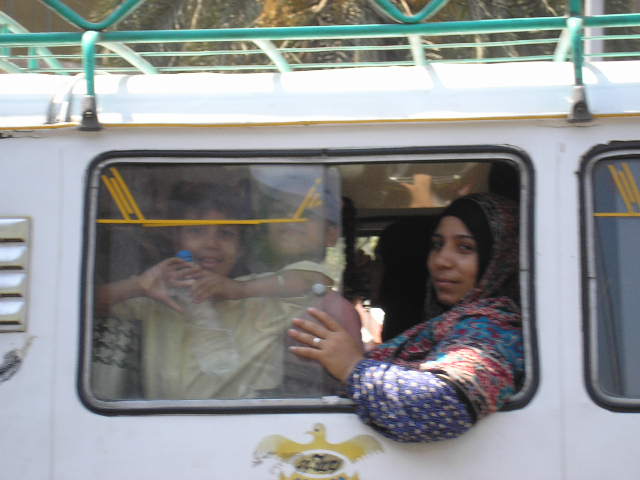 A good photo if I say so myself, now if I had a really good camera I would say… yippee. 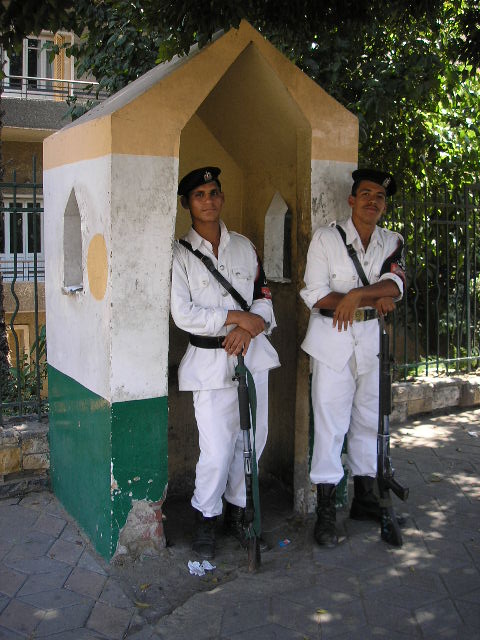 Here is a really rare photo, I asked for permission to take a photo of the two guards in front of the Niger Embassy and they said or nodded their head yes.

Normally Embassies are not too keen on you taking embassies, I am not sure why, it is pretty easy to walk around one and see what is up, or how you could be a bad person, you can enter an embassy and act stupid real easily.